The Bolivarian project enlarged the platform of state-owned enterprises to increase economic, political and social control 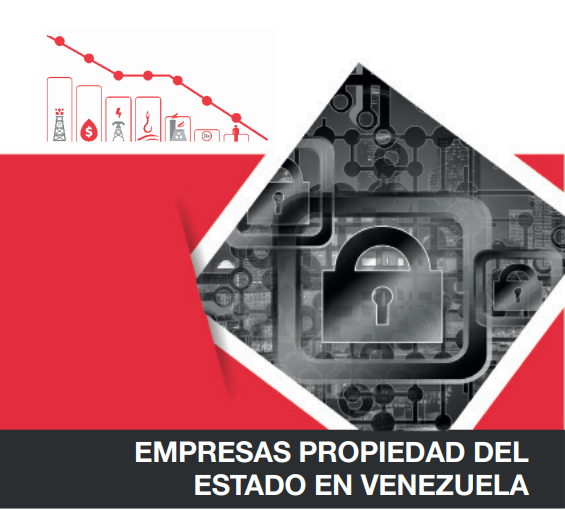 An investigation launched by Transparencia Venezuela in July 2016 managed to unravel how the central government articulated an institutional structure -which began to work under the guidelines of former president Hugo Chávez- to consolidate a conglomerate of enterprises that allowed him to have enormous sums of money, without internal or external controls and without the possibility of being subjected to public scrutiny.

It is a state network -also used for the political and social control of Venezuelans- whose study is constantly updated, with information obtained from the consultation of reports from the Office of the Comptroller General of the Republic, the System of Registration of Organs and Entities (SISROE by its acronym in Spanish), Memoirs and Account of the ministries, web pages of these offices, official gazettes, declarations of government enterprises, digital media and investigations of experts.

The State-owned Enterprises database is hosted at Vendata.org, a tool promoted by Transparencia and Ipys Venezuela, which aims to produce the largest set of open data with public information of Venezuela, through the collection, processing and transformation of closed data to open formats.

Caracas, 28 September 2017.- From 2001 to 2017, the Venezuelan state went from owning 74 public enterprises to 526, four times more than Brazil (130) and ten times more than Argentina (52), consolidating a structure that has served for the discretionary and non-transparent handling of huge sums of money, to the detriment of the nation and its citizens.

The consolidation of State-owned Enterprises (SOEs) was preceded by the limits to the right to property and free enterprise, the establishment of exchange control and prices, as well as modifications to the Organic Law of the Public Sector Financial Administration. All this laid the foundations for the government’s hegemony in all sectors, starting with expropriation, confiscation, nationalisation and renationalisation, renegotiation of strategic associations in the oil sector or creation of enterprises.

According to the results of the investigation organized by Transparencia Venezuela, which concentrated on eight companies in the oil, manufacturing, agrifood, financial and electric sectors, in 2016 the SOEs incurred losses of US$396million, a figure that exceeded the nation’s budget for health, education, housing and social security. The most emblematic cases are PDVSA’s, with negative balances estimated atUS$238 million and Corpoelec with US$ 45 million.

The structure of the entrepreneur state «has operated in a context of opacity, weak legal controls, lack of accountability, frequent changes in the attached agencies and authorities and impunity, so that it can be said that an institutional arrangement was prepared for the extraction of resources by an elite, in terms of Acemoglu and Robinson (2012), and which explains the failure of countries.”

The findings of the investigation show «the intention of the high government to seek the capture of the state, the appropriation of public resources and political control,» in complicity with the Supreme Court of Justice and the Office of the Comptroller General of the Republic, «typical elements of a kleptocracy,» a system of government in which the interest of self-enrichment at the expense of the nation’s assets is the main characteristic. «Transparency International links this term with the grand corruption and adds impunity as another typical aspect, which unfortunately is also present in Venezuela,» the final report states.

Of the 526 public enterprises identified so far, 74% were acquired or created during the governments of Hugo Chávez and Nicolás Maduro.

It was determined that there are SOEs in all sectors and not only in those considered strategic as energy, transport, telecommunications and water. They are distributed as follows: 25% manufacture, 13% agrifood, livestock and fishing sectors, 12% oil, 7% are financial institutions, 7% services, 6.5% transport, 5% construction, 5% communication, 4% mining and the rest of electricity, water, hotels and even an aerospace enterprise.

Of the 526 companies, 114 are PDVSA’s subsidiaries, although 42 of them are not oil enterprises. At first, the state oil company acted as the great financier of the expansion of the entrepreneur state.

The investigation confirmed opacity in the public information of the SOEs. «Only the name of the president or maximum authority of 24% of them is known, the share structure of 21% and the composition and members of the Boards of Directors of only 6% of the 526 companies, for example.”

The investigation project determined that the state domain, through the SOEs in sectors such as food, cement, banking and import management, «has been used for the creation of distribution mafia in parallel markets, including smuggling, while it has severely affected the productivity of private entrepreneurs and limited the purchasing options of citizens at large.»

Also through the SOEs, access to subsidized currency under a government monopoly has been exploited.

The study determined that in 2006 there was an important turn in the management of the companies «directed to the achievement of political electoral and social control interests.» «Another pernicious feature has been the subjection of SOEs to the PSUV interests, manifested in the excessive growth of their payroll, as part of a clientele policy and protection of party activists.»

According to the data obtained, the SOEs employed at least 440,717 people, «which represents 5.6% of the working population, according to the latest data published by the National Institute of Statistics in 2016.» The enterprises with the largest number of workers are PDVSA and its oil and non-oil subsidiaries, followed by manufacturing and electricity.

It also showed the «opaque and biased distribution of its products towards allies or demanding loyalty, for example, vehicles (Chery), household appliances (Haier) and food.» In addition to the use of resources  for  electoral  campaigns»and the adoption of international cooperation agreements in disadvantageous conditions to the nation’s patrimony, but favorable to the interests of the party in this scenario.»

Transparencia Venezuela determined that the acquisition of so many enterprises has been a «terrible investment» in the short and medium terms, as poor financial results have forced the state to inject resources from the National Budget.

«The 2017 National Budget assigns to the SOEs US$182 million, which represents 6.24% of the total approved and, through additional credits, have received US$180 million more, according to the investigation report.

Of the amount of money administered by SOEs, there is only a rough estimate because not all the enterprises published their budgets, and the resources they receive, not only come from the National Budget and the additional credits but also from resources from existing extrabudgetary funds and the Central Bank of Venezuela, «of which there is less possibility of obtaining complete and updated information.»

In 2016, 256 enterprises managed US$ 1.85billion, according to the National Budget plus additional credits. By 2017, the enterprises original budget increased 246% in nominal terms, reaching US$6.07 billion without considering PDVSA’s budget, which is not included because it has not been published.

«All enterprises have required financial assistance to operate, including PDVSA, the big financier of the state business expansion has been seriously indebted, which is coincident with its budgetary data published in October 2016, which estimate losses of US$238 million.»

In 2016, the sectors that handled the most resources were «financial institutions (42%) and manufacturing sector enterprises (11%), activities in which the state’s actions are not justified.»

It is concluded that the enormous sums of money were executed «in the context of a financial administration lenient legal system, with no possibility of public scrutiny, without internal controls or external monitoring institutions. To make matters worse, the already weakened accountability, in 2017 was completely abolished through two pronouncements of the Supreme Tribunal of Justice: judgments 1 and 90 of 2017.»

It is noteworthy that the case studies «left in evidence allegations of corruption linked to misappropriation, embezzlement, bribery, influence peddling, cronyism, nepotism and political corruption. Of the eight sectors analyzed, cases of corruption have been verified in PDVSA, CAAEZ and CORPOELEC, which corroborates the high levels of impunity denounced by organizations such as Acceso a la Justicia (2017).»

The investigation showed that the SOEs are used to favor certain groups of the Bolivarian National Armed Forces (FANB), which has distorted their constitutional commitment «to direct it towards the authority and the political party of turn, which has not represented the superior interests of the nation».

«In the sample of 127 enterprises whose top authorities are known, 30% have some active or retired military in the board of directors. These are important enterprises in the agrifood, financial, energy and basic companies, enterprises in which most of the resources are managed».

Of particular note are the enterprises Banco de Venezuela, Bolivariana de Puertos, PDVSA, Compañía Anónima Militar de Industria Minera, Petrolíferas y de Gas (CAMIMPEG), the airline CONVIASA, the electric company CORPOELEC, the steel industry SIDOR, Corporación Única de Servicios Productivos y Alimentarios that agglutinates all the food sector enterprises, Venezolana de Turismo that coordinates an important group of hotel companies, among others. «These enterprises are important, both for the amount of resources of their budgets and because their activities are part of strategic economic sectors.»

According to the findings of the investigation, the Venezuelan society has been the great loser in the government’s bid to become an entrepreneur, since most of the enterprises have not reported benefits to the country in dividends, royalties or taxes, much less in goods and services. «In terms of promoting development and stimulating local production, the per capita Gross Domestic Product (GDP) data show an accumulated fall of 35% from the last quarter of 2013 to June 2017, while data from trade balance reflect greater dependence on imports and decrease in the quantity and variety of export products.»

«The dramatic national crisis, which since 2016 is considered a humanitarian crisis, is partly responsibility of the SOEs poor management of the manufacturing, agricultural and commercial sectors, as the Venezuelan state has important manufacturers of the basic items that are scarce in the country and instead of increasing their production, it has decreased it.»

The study notes that there are «serious deficiencies in coverage and quality in telecommunications, mass transportation, water, roads, housing construction, production and distribution of essential foods, medical supplies, pharmaceuticals and personal hygiene items, which are goods and services that affect directly in the Venezuelans quality of life.»

Clarification: the figures have been calculated using the prevailing official exchange rate (DICOM) for 28 September 2017, which is 3,250 Bs. per US dollar.